Parading on a Pack Animal of Justice: A Sermon for Palm Sunday 2018 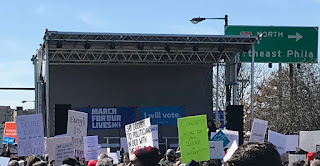 We come to this familiar Palm Sunday narrative and encounter what many headers in Bibles unfortunately label as “Jesus’ Triumphal Entry into Jerusalem.” While we may be tempted to turn this parade of palms into victory lap of the Messiah, this is a more subversive picture John aims to paint.

The Gospel of John is potentially the most intricate of the four gospels when it comes to creative literary patterns and allusions. Likely written towards the end of the first century, the writer, possibly the beloved disciple, has had time to reflect on and refine his telling of the impact of Jesus’ ministry not only on the Jewish people, but also and especially the whole world. The writer wants to ensure the movement continues beyond his final stroke of the pen.

One of the ways John goes about this is through the art of inclusio, creating parallel imagery on opposite sides of a short story that eventually move you towards a center, where you find the real focal point and charge of the narrative. In this morning’s reading, John intentionally draws the reader from the outer layer of the Chief Priests and Pharisees, moves inwards to the crowds, and ultimately zooms in on Jesus and his movement into Jerusalem, which is where the entirety of the gospel has been headed all along.

We begin with the outer layer and the presence of the Chief Priests and Pharisees.  They arrive on the scene with one goal- to put Lazarus to death. We often miss this detail, as the lectionary drops us into the triumphal entry just after this vital framing anecdote. Yes, rather than rejoice in the unbinding of one who was once dead but now alive, they become enraged by their cynical envy and invade the crowds on a covert operation to squash this gospel that has become their greatest perceived threat to religious power and interpretation of the law. Yet, when they encounter the crowds, their mission is thwarted, leaving them to cross their arms in disdain for a gospel far too inclusive for their liking. As John writes on the bookend of today’s reading, “You see, you can do nothing. Look, the world has gone after him!”  The world- as in the light has come into the world, for God so loved the world, the cosmos has gone after him.

As I read this text this week, I found myself wanting to yell at the pages- of course they did! Jesus raised Lazarus from the dead. Death was exposed as fickle in the work of this one named Jesus, how could any cross arms in judgment and wish the end of the long-awaited fulfillment of their story’s greatest hope: newness of life!

Then I paused. In many ways, religious communities have not changed since that first Parade of Palms. When movements of liberation begin to rise up in the broader world, the church often either stands on the sidelines as jealous bystanders, frustrated by witnesses to resurrection happening beyond our control, or undercuts movements as judgmental cynics. Yes, there are fragments of faith communities who participate in social revolutions and protests, often led by marginalized peoples and then labeled as rebellious, activist, leftist, outside the norm, etc. Meanwhile, the dominant (white) American church, in the broader scope of our history, is apprehensive in our public witness and tends to trail behind at the eleventh hour of these movements that intersect the gospel with the pressing issues of our day. We rarely are the networks of people on the forefront of mobilizing change despite the fulfillment of our greatest hope: God has raised both Lazarus and Jesus from the dead!

Then there is the second layer to John’s story. The crowds. While initially tempted to turn their response to the raising of Lazarus from the dead into a romanticized celebration, praising their lifting of palms as if, yes, they get it, John’s unique approach to this story is to paint with a bit of irony as the only of the four gospels to reference the branches as palms. These palm-laden celebrations were akin to a parade of champions greeting political figures and war heroes as they returned from conquest, a version of a military procession less the tanks and soldiers and add some chariots and horses. The aim of at least portions of the crowd, in light of the resurrection of Lazarus that rightfully stoked their longings for salvation from an oppressive Roman empire, is to leverage Lazarus for a new political movement with Jesus as their national hero and revolutionary war leader. With palm branches in their hands and Psalm 118 cries of “hosanna, save us” on their lips, John illustrates with a satirical tale of nationalized religion with an undercurrent of aggression we may be tempted to drape around a reduced gospel.

Again, while it would be easy to engage with a layer of judgment, we are not much different still. How often do we allow our discipleship and Christian witness to be co-opted by agendas both progressive and conservative and used to leverage political leaders we mistakenly believe can save us? We even parade our version of Jesus as one who has conquered all others. While we have been transformed by the good news of resurrection, a story we genuinely long to embody for the sake of our more vulnerable neighbors near and far, we give evidence that we are still bound by death as we demonize those with whom we disagree and leverage our motives as absolute and most “right.”  In this sense, the watching world often sees the church on opposite sides of the same road along Jesus’ parade route as we wave our palms of power and chant epithets of dominance that reflect more of our political allegiances than those aligned to Jesus, who rode into town on a pack animal.

This is where we find the center of John’s alternative narrative of allegiance. Instead of a chariot or a horse, “Jesus found a young donkey and sat on it.” Other translations use another, more “traditional” word, to describe Jesus’ impromptu discovery of this four-legged creature whose sole purpose is to carry the heavy loads of the traveler. Upon this pack animal, the Messiah cuts through the parades of power and pokes fun at the Pharisees threatened by the message of compassion, grace, and welcome. Then, borrowing the words of the prophet Zechariah, John underscores the function of the imagery, “Do not be afraid, daughter of Zion. Look, your king is coming, sitting on a donkey’s colt.”

This is what John’s story has been building to and moving out from in this morning’s gospel lection. The gospel writer declares, to cynics like the Pharisees, others who lust for violent opposition and political power, still more to you and me, do not be afraid. Christ has come as the very presence of God among us who carries the burdens of the whole world now gone after him. This is what mobilizes the witnesses of the crowd "to continue to testify" to the subversive and humble witness of the One able to resurrect new life and alleviate their long-standing fears.

It is no secret that the condition of the world these days is saturated in fear. When we consider the on-going realities of white supremacy and police brutality, sexual harassment and assault, the events in Austin Texas, and more: we are a people afraid. In light of all this and more, there have been a steady stream of rallies, marches, and digital parades, each a modern cry of, “hosanna, save us.” Each with strong critics and those questing to leverage the campaigns as means to garner political power and possible theological conquest.

Yesterday’s March for Our Lives was no different. As thousands of youth sought to resurrect new life out of the death that threatens to bind them and their peers, many cynics sought to squash their movement through name calling and false assumptions about being paid actors; others, for sure, looked to leverage the movement for their own powerful gains. All the while, courageous young people like David Hogg and Emma Gonzalez, students from Marjory Stoneman Douglas High School, rode into Washington as if on the back of a youthful colt in a quest to alleviate fear. The youth, many who are Christians, declared #enough and #neveragain as their own hosanna demands for immediate action related to gun laws the adult realm has been too cowardice to confront. As I marched in the Philadelphia rally with my family, including four young children, I read signs and heard stories from thousands of youthful organizers for change. Along the way, I heard the words of Archbishop Oscar Romero, martyred for his witness among the poor in El Salvador, “We know that every effort to improve society, above all when society is so full of injustice and sin, is an effort that God blesses; that God wants; that God demands of us.” I also thought of both the words of Jesus, “the kingdom of God belongs to children,” and those at the end of today’s gospel, “Look, the world has gone after him.”

Then I thought of the call of the church. In a world strained by fear and crying out, “hosanna,” we are to be a people mobilized, neither by cynicism nor conquest, certainly not the myth that politicking alone can save us. Rather, in light of the reality of resurrection, we are to embody the humble posture of Christ who rode upon the back of a pack animal and carried the heavy burdens alongside the broken and oppressed, anxious and afraid, children and youth, near and far. What this may look like will vary from person to person, for some it may mean marching, others community organizing, and others something totally different. This is where I find encouragement in the words of the late church planter, innovator, and faithful activist, N. Gordon Cosby, who said just before he died:

“At this point in my life, and at this point in our world's life, I am asking what is to be my focus- to what am I to be giving my limited time and energy? What is the new thing, the genuine thing, that God wants me to be learning, doing, being now? For me the central question is what it means to be the authentic church of Jesus Christ, crucified and resurrected? What is its nature? Its essence? And how can that essence be structured and expressed so as to become a healing agent in the world?”

In many ways these are the questions posed neither by the Pharisees nor the crowds, but by Jesus who found a young ass and sat on it as he made his way to Jerusalem.

Friends, as we begin our Holy Week pilgrimage, hear the central message of John’s gospel: do not be afraid. While the journey ahead is laced in sorrow, it is also framed by resurrection hope- the same God who raised Lazarus from the dead will also do the same with Christ. This is good news worth chasing after in a fearful world. Actually, if we have the eyes to see and the ears to hear, the world is already doing just that. So may we respond to their parades of hosannas, not by way of cynicism or quests for dominance, but saddled upon our donkeys as we humbly shoulder the real pains of the world and dismantle whatever powers stand in the way. And if you are not sure what this looks like, I suggest you ask the kids. Amen.
Posted by Greg Klimovitz
Labels: Church of the Saviour, Current Events, Lectionary Reflections, Lent, Religion, Sermons, Social Justice, Spiritual Formation, Youth Ministry
Newer Post Older Post Home