Mile Nine Enthusiasts: A Word on My First Half Marathon 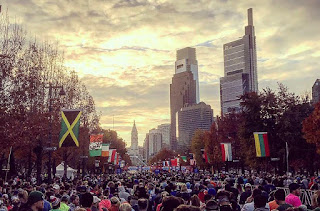 The first half of my first half marathon was pretty smooth sailing. In fact, my pace was a little quicker than expected…and maybe than it should have been. A large part can be attributed to the adrenaline rush you get from running alongside over 10,000 others. You also cannot help but be electrified by the crowd that lines the route with signs, noise makers, occasional marching band, or a full church choir.

The energy carries you.

And in the midst of all the reasons to despair in these days, the positive vibes and affirmations that we can be good and kind and encouraging to one another regardless of race, class, religion or whatever pushes you to perform at your best…or even better than you could on your own.

I will continue to say, the kingdom of God is like a half marathon.

Still, there are stretches of every run where the crowd is not so full. In fact, as I crossed over the bridge into the Mantua neighborhood and passed by the Philadelphia Zoo, there was not a single spectator. The reasons are likely many, but I vividly remember the silence. The only sounds were those of soles pounding the pavement, especially as most racers were wearing earbuds. The contrast was stark as the journey intensified.

And for the first time, even though surrounded by many, I felt alone. 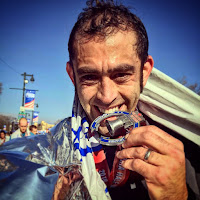 Then, at around mile nine, came a few sporadic voices from a family with two young kids handing out donut holes to runners. They were there when the rest of the crowds were not, when encouragement was not trendy but needed for the final quarter stretch. As I approached mileage my legs had not previously experienced, the presence of smaller pockets of people like this family, who chose to rally from beyond the trendy cheer sections, was vital. In no small way, they reminded me I was not alone. Especially as they called out my name, which I had forgotten was on my bib (don’t judge me).

Of all the experiences I have collected from this past weekend's race, this one continues to linger with me. And I wonder:

Who are those people in your life who have been there at mile nine?

When you have felt most alone, wearied, and unsure if you can venture any farther, who are those who have been there when the crowds have faded?

Who are those faithful souls who have offered you a burst of “you got this” when you were on the brink of venturing into unknown territory and wondering if you had what it takes or what was necessary for the journey ahead?

When have you been a mile-nine enthusiast towards another, humbly standing at a critical turn in another's life?

In what ways might you and I be called to offer our voices of solidarity and hope, compassion and affirmations of love and strength when silence and isolation threatens the human will and spirit?

This Thanksgiving, I am grateful for my mile-nine enthusiasts. I am also looking for ways that I can be the same to others. After all, when the crowds faded, Jesus was frequently there to break through the silence with a fresh word of hope, love, and encouragement to those wearied by the world. 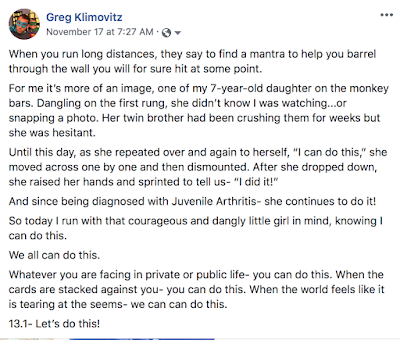