Arch of (in)Justice: Reflections on a Pilgrimage to St. Louis for #GA223 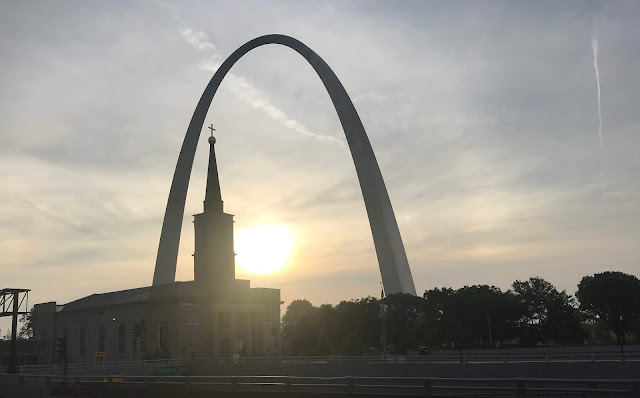 Last week, my days were spent with over 1,000 Presbyterians from around the country who gathered in St. Louis for the 223rd General Assembly.

For those unfamiliar, the General Assembly is the national gathering of the Presbyterian Church (U.S.A.). Commissioners and delegates representing over 9,000 churches, 170 presbyteries, and 16 synods nation-wide worship, study, discern, and decide on theological positions, business items, budgets, investments, and public witness related to a wide range of social issues. The Assembly is also a chance to (re)connect with friends and colleagues, some whom I only see every two years at the event. In many ways, after perusing the schedule and overtures to be discussed, I presumed this year would predominantly be about networking.

I did not expect #GA223 to erupt into a week-long revival and participation in God’s justice.

More on that in a moment.

On one of my morning runs (yes, I am that guy now... never intended to become that guy; used to loathe that guy), I paused and snapped the picture above of this 630 foot national landmark. Because, you know, instagram.  Intended as a symbol for westward expansion and a “gateway" to American glory, the arch casts a shadow over an old cathedral and a historic courthouse along the Mississippi River. What makes for a beautiful picture on a sunrise run also serves as a (unintended) reminder of how the church and state were (are) bedfellows in these expansive quests for glory at the expense of Native Americans whose land we stole and people we displaced and killed.

The arch indeed casts a shadow upon both church and state, which sadly lingers still.

Then I returned from my run and landed on Psalm 24:

“Lift up your heads, O gates!
and be lifted up, O ancient doors!
that the king of glory may come in.”

What would the psalter have to say for this icon of empire? What about the church?

Whose glory do we usher in through our religious and political gateways? At what cost?

Back to General Assembly.

The week at #GA223 was both a reflection on and praxis of the kin-dom of God. We talked to great lengths about the infinite scope of God’s grace and the wideness of Christ’s embrace. As we discerned and decided together, we also committed to following our words with our feet, our statements with our activism, and our worship with our public witness. Yes, even a march down the St. Louis streets took place as we advocated for #endcashbail (see below). Say what you will about organized religion and the decline of the mainline church, Presbyterians demonstrated in St. Louis that we are indeed a called, sent, and resurrecting people committed to more than institutional preservation. We are disciples gathered and scatterered to engage our time and place(s) with relevant and liberating incarnations of the gospel. 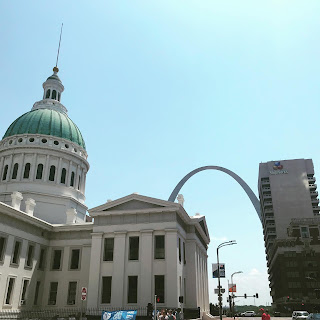 Sure, there were decisions made and voices lifted of which we may have disagreed. It must be said, not all of the actions taken were/are unanimously received with a sense of jubilee; neither were we lured by a belief that the church has arrived once and for all at what it means to be a provisional demonstration of what God intends for all of humanity and the created world.

Yet, as we worshipped and marched, fellowshipped and debated, elevated concerns for the incarcerated and victims of abuse, responded to ongoing realities of racism and the discrimination of LGBTQIA+ persons, exposed the exploitation of creation and prayed for nations torn by war, and even called out the realities of American empire that marginalizes people looking for refuge, there was an energy in the convention center within the shadows of an Arch that dared us to lean into the stirring of God's Spirit. It was evident, something new and different and faithful and messy and maybe a bit controversial was emerging from this body of believers; we were being reformed and still reforming.

We were becoming all the more aware of the shadows cast by archways of despair, confessing our own past and present complicity in oppression; we were also being attentive to the echoes of Scripture, which dare us to live into the sacred story as we fling open the gateways to God’s kin-dom of justice and peace, reconciliation and liberation, and a concern for our neighbors most vulnerable to imperial pursuits of vain glory and expansive conquests of power. All this because we affirm this to be gospel work; this is discipleship; this is the Way of Jesus as guided by the Holy Spirit.

And this, as mentioned, was not what I was expecting at this particular Assembly.

As we continue to live in the past and present shadows of empire, with stories of struggle breaking every minute, I pray what we were a part of last week would move all of us to increased public witness of the Gospel between St. Louis and Baltimore, near and far, here, there, and everywhere.  May we move beyond these shadows cast and through the gateways of God’s kin-dom. May we even usher in others who have been relegated to the margins for too long.

May we also be reminded that death and despair have not the last word; God is doing something new and we are being invited to come along for the ride- together as the kindom of God.

Lift up your heads, O church!
Be lifted up, O ancient people.
That the Spirit of the Living God may come in
to open a gateway to justice
an arch of hope
for all who bear the sacred image,
creation that lingers for liberation. 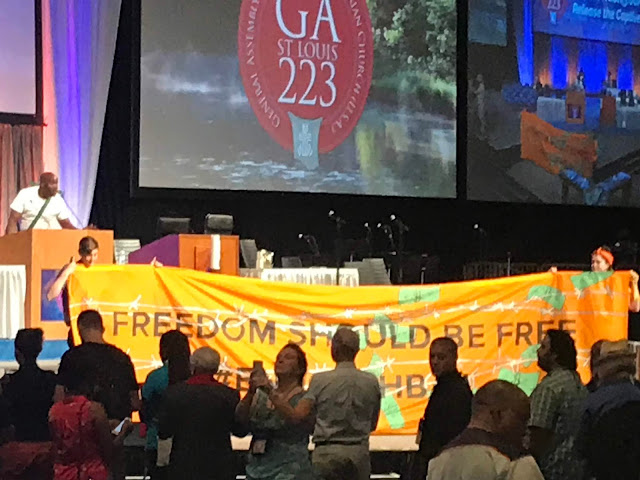 Here are just a few of the ways our the priestly institutional church participated in the prophetic movement of the gospel. As Rev. Cedric Portis, pastor of Third Presbyterian Church noted in worship, the Spirit is thawing out the frozen chosen. You can also check out a summary of actions the Presbytery of Philadelphia developed, aware there is much more left to say…and do.

There is so much more that happened at #GA223, which does not even include the work of the Way Forward Commission, as they restructure the corporate entity of our national church.

I continue to give thanks for the opportunity to gather at these sacred reunions that have apparently become biennial revivals. May we continue to love one another in our shared work even as we love our neighbors watching (or not) on the outside.