Demanding Inclusion: Did a Canaanite Woman Know More About the Gospel Than Jesus? 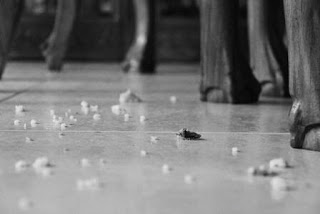 This past week, local celebrity and UVA alumna, Tina Fey, made a special appearance on SNL and invented the word“sheetcaking.” In the face of the all that’s going on in the world, comfort eating as escape was her solution.  The bit was quite funny.

Blogger, activist, and Presbyterian pastor, Carroll Howard-Merritt, pushed back on the sketch. Don’t sheetcake in avoidance but hit the pavement as witness- engage.

I say have cake and be an activist, too. Take cake to the pavement?

In this week’s gospel story, Matthew locates Jesus at the center of confrontation and controversy related to a deep-seeded racial and ethnic divide.  Yet, unlike any other texts that I can think of, Jesus appears particularly vulnerable and initially on the wrong side of welcome and embrace.

While we may be tempted to sheetcake away this uncomfortable story, the Spirit’s work through the lectionary dares us to engage it.

The story begins with Jesus in a home along the Mediterranean coast, the region of Tyre and Sidon. In what appears to be an intended sabbatical at the shore, Jesus could not escape notice and was immediately greeted by an unexpected Canaanite woman and her possessed daughter. This woman comes from a region known for violence, aggression, and oppression- including historical violence against the Jewish people; quite possibly violence against their own people. She is from enemy territory- a foreigner. Mark is even more explicit, identifying her as a Syrophoenician woman, i.e. from Syria.  Does she not know of the present and historical racial-tensions as she approaches Jesus?

Unconcerned about her heritage, history, or the reputation of her country, or maybe seeking refuge from it, this woman pleas on behalf of her possessed daughter, “Have mercy on me, Lord, Son of David; my daughter is tormented by a demon.” She expects a miracle and so evokes not only the Hebrew name of the Messiah, but also one of the central Hebrew characteristics of God- eleison or mercy. In Hebrew, the word is chesed, i.e. loving kindness or undying and steadfast love. My kids’ Bible turned the word into a lyric, “God’s never-stopping, never-giving-up, always-and-forever love.”  Chesed is central to understanding the good and just activity of God.

If you have read even mere fragments of Matthew up to this point, you probably would expect Jesus to do just that. I did.

Yet Jesus’ response is somewhat uncouth. First, he remains silent. Then, when his disciples express their annoyance and request for her to be sent away, he responds, “I was sent only to the lost sheep of the house of Israel.” As if the gospel was closed to ethnic outsiders and others.

That did not sit well with this Mama on a Mission.  Her daughter is possessed and neither her home nation nor this religious community is offering her refuge or a chance at life for her little girl. The life of her daughter appears to matter to no one. Jesus was the end of the line and when she was not satisfied with the response of this miracle worker, this mama bear goes toe to toe with the Difference Maker and demands inclusion and deliverance with fist raised high. Her life matters. Her daughter’s life matters. Some may even say she gets a bit aggressive in rhetoric. Who could blame her? We dare not blame her. After all, in the face of the demons of enmity, division, and hatred in church or state, to demand inclusion of the other is to be about the work of the gospel; this is the very heart of chesed.

Hear the words of The Belhar Confession, written in the midst of South African Apartheid:

“We believe that this unity must become visible so that the world may believe that separation, enmity and hatred between people and groups is sin which Christ has already conquered, and accordingly that anything which threatens this unity may have no place in the church and must be resisted.”

The woman from Canaan foreshadows these words as she resists even the limits posed by Christ and pushes back, maybe quite literally, “Lord, help me!” She does know her history. The Hebrew God is always on the side of the other, the estranged, the poor and the oppressed. Yahweh is their help and refuge.

Again, Jesus surprises the reader, “It is not fair to take the children’s food and throw it to the dogs.” Whether as a sign of his humanity vulnerable to the cultural rhetoric of the day or as a means to set the stage for something more dramatic to occur, the disciples were sure to nod in agreement when Jesus drops an early slur and refers to her as a “dog.” It is, after all, what their faith community had taught them about who’s in and who’s out, who belongs and who does not, who gets God’s blessing and who does not. They had not been raised to believe anything different.

Church, beware of your silence in the face of injustice and racism. To be silent is to be complicit to a narrative that runs counter to the gospel. Silence ensures generations of elitism masked as righteous faith will continue to exploit the likes of a Canaanite woman and her child. In this sense, along with Jesus and the disciples, we are being confronted by this outsider.

With the tension of Matthew’s narrative at its thickest, this woman will be slowed neither by the distasteful reference nor complicit disciples. Instead, she subverts it. “Yes, Lord,” the woman from Canaan proclaims with her raspy and worn voice strained by her persistence, "yet even the dogs eat the crumbs that fall from the master’s table.”

It is in that precise moment that the story turns. Jesus is moved, some would say “changed,” by the persistence of this outsider. Dare we learn from the empathy of Christ this day, as he then speaks the words she had traveled so far to hear, for chesed to come. And this time, he addresses her with dignity, “'Woman, great is your faith! Let it be for you as you wish.’ And her daughter was healed instantly.” (Mt. 15:28)

After this encounter, Jesus ascends a mountain along the Sea of Galilee and extends chesed among the great crowds of "the lame, the maimed, the blind, the mute” and feeds four thousand hillside with seven baskets of leftovers. That is, there is enough of God’s chesed for the whole world, to include Canaanite women and their children.  Matthew even ends his Gospel, “Go, therefore, and make disciples of all nations…”

Today’s lectionary story affirms loud and clear, even demands our eyes to be opened to the good news that in the kingdom of God there is no place for exclusion based on race, class, ethnicity, or any other mark of “difference."  The faith of the Canaanite woman, faith that pushes even Jesus to respond with renewed empathy and grace, once and for all exorcizes any doubt that in the ministry of the Messiah and family of God, all belong.  Ideologies of racial and ethnic supremacy must be cast out as the demons they are.

The question posed for us, where do you find yourself in this story?

Are you there as the little girl, longing for an advocate to lift you from what is keeping you from experiencing life to the full? Has the rhetoric of the day, from the streets to political leaders, maybe even faith communities, left you wounded and wondering if you matter at all? May you hear loud and clear: God’s love is especially for you. God’s chesed embraces you.

Are you alongside the Canaanite woman holding the vulnerable child demanding that the chesed of God show up and liberate those who have been wounded by violence and terror, bigotry, poverty, the list goes on? Are you the one crying out, “Lord, help me! Lord, help them!” God’s chesed is moving through you in your persistence.

Are you there among the disciples, unsure if you have what it takes to speak up in the face of injustice, afraid of what it may cost you? May God’s chesed transform your silence into an ally-ship for those questing for belonging and equality.

Are you there with Jesus alongside this Canaanite woman holding her child?  Are you willing to be changed by the stories of your most vulnerable neighbors, the concerns of those who have been demanding that their lives matter after generations of oppression, reduced opportunity, and entrapment in a system completely bent against them? Are you willing to host conversations that elevate the voices and stories of those far-too-long silenced? If so, church, God’s chesed is at work in you.

Over 300 years as the Presbytery of Philadelphia, we have been a mosaic of all the above. Originally marked as dissenters and outsiders, we have been at the forefront of demands for justice and equality in the Greater Philadelphia region. We have ordained emancipated slaves to plant churches and conducted stops on the Underground Railroad. Our pastors have beenmartyred for advocating for African American’s right to vote and others imprisoned on major roads as they demand fairness and sanctuary for the immigrant. We have ruling elders who have led marches down Broad Street in support of Civil Rights and whole congregations have rented homes for refugees as they flee the very region mentioned in today’s gospel story. We even spent an entire year on courageous conversations related to race, bias, andprivilege.

We also have a long way to go. We have not always welcomed the stranger, turning aside the Canaanites in our own land. Our church leadership does not always reflect the diversity of God’s people, because sameness can just be easier. We sometimes place tradition, budgets, privilege, and our love for ecclesiastical systems ahead of God’s concern for justice, fairness, and equality. We have occasionally been silent when faced with real matters of racism, bigotry, hatred, and discrimination, local and global, out of fear, angst, or an unwillingness to break with the status quo. Even worse, sometimes we have hid behind our statements, thinking that our words are enough. May we hear the witness of the Canaanite woman demanding from us something better, far more gracious and inclusive.

Church, today’s gospel story is one we must deeply wrestle with in such a time as this. We cannot sheetcake it away. It confronts us as those who profess faith in Jesus Christ, who was moved and changed by the persistence of one marginalized by both state and religious community. It dares us to look inward and confess our own complicity even as we are moved by the empathy of Christ to live into the chesed of the gospel outward, linking arms with all those who have been longing for more than a scrap of God’s justice to fall from the table.

As we stumble along the way, may we hear the Good News of the Gospel- the same chesed demanded of Jesus and ultimately offered to that little girl, remains boundless. God’s never-stopping, never-giving up, always-and-forever love comes to each and every one of us in the person and work of Jesus Christ. That’s more than a crumb of good news.

May we never refuse this gospel from another.  Actually, may we demand it for each and every one of God’s children whom we are called to love and serve from Charlottesville to Philadelphia, Pottstown to India, this nation and to those all around the world. Amen.
Posted by Greg Klimovitz
Labels: Gospel of Mark, Lectionary Reflections, Politics, Sermons, Social Justice, Spiritual Formation
Newer Post Older Post Home