On Epiphany: The Dark Story Behind Jesus' Elevation of Children 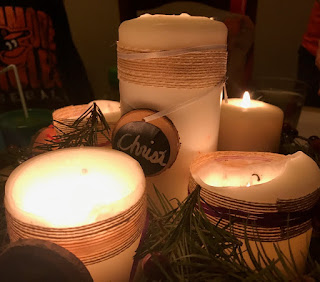 Yesterday, I walked in the door to a dispute our twins were having, likely unique to minister kids.

Noah [running towards me]: Daddy, is tomorrow Epiphany?

Me [barely having removed my coat]: Yes.

Then he ran down the steps in victory.

Our family lights the Advent candles all the way through Epiphany. This way the Christ candle does not get cheated.  Also, our kids get to embrace Christmas as a season that culminates with the star that led the magi from the east to pay homage to the toddler Messiah.

Yet there is a dark and hellish side of Epiphany. The full script of Epiphany leaves a bitter taste in our mouths after binging on the more joyous pageantry of the Christmas drama.

"When Herod saw that he had been tricked by the wise men, he was infuriated, and he sent and killed all the children in and around Bethlehem who were two years old or under, according to the time that he had learned from the wise men. Then was fulfilled what had been spoken through the prophet Jeremiah: ‘A voice was heard in Ramah, wailing and loud lamentation, Rachel weeping for her children; she refused to be consoled, because they are no more.’" (Matthew 2:16-18)

This is not exactly a preferred bedtime story for young children during this holy season. While we laud God who chose to become flesh and take on the form of a baby, the incarnation came at a cost. The response to the Christ child by those thirsty for power, or anxious about losing the power they already had, resulted in mass genocide of the holy innocents who stood in the way of and were deemed infantile conspirators against an emperor who wanted nothing to do with shared or surrendered power and influence.

And while Mary, Joseph, and the newborn king may have escaped in the middle of the night to find refuge in Egypt, "Rachel and her children" throughout the neighborhoods of Bethlehem were not so fortunate.

Then I wonder, is this precisely the story Jesus' parents told him every year when they celebrated or at least acknowledged his birth?

You can almost hear Mary whisper, unaware of her prophetic wisdom, "My son, you are our beloved. You are God's beloved. Yet your entrance into this world created quite a stir and has not been as beloved by the powers that press upon us from all sides. Many have already died so you may live, children even. Young ones like you. Never forget your life came at a cost. Never forget the babies of this world, the children of Bethlehem. So live and love, even offer up your own life, for all those who are threatened to have theirs taken away. And never forget the children of Bethlehem."

Jesus surely clung to the wisdom of his mother as much as he probably recited the lyrics of the song she sang while pregnant, "[God] has brought down the powerful from their thrones, and lifted up the lowly..." (Luke 1:52).

It's no wonder Jesus, the Christ Child now matured Messiah, forcefully spoke these words to his disciples who had become a blockade to little ones in their thirst for power and privilege:

"People were bringing little children to him in order that he might touch them; and the disciples spoke sternly to them. But when Jesus saw this, he was indignant and said to them, ‘Let the little children come to me; do not stop them; for it is to such as these that the kingdom of God belongs. Truly I tell you, whoever does not receive the kingdom of God as a little child will never enter it.’ And he took them up in his arms, laid his hands on them, and blessed them." (Mark 10:13-16)

The days ahead of us as both a nation and church, even larger world, are full of varied questions that breed great angst and maybe fear. Those in positions of power continue to press in on all sides and the future for our children is as much at stake now as it was two millennia ago.

Dare we not allow their future to be slayed in the name of politics, privilege, phobias laced in ignorance, the preference for self-preservation and nationalism masked as patriotism, and religious assimilation to all of the aforementioned. When little children cross our borders or enter our sanctuaries, may we have the courage, integrity, and Christ-like faith to receive and protect them. When we consider the state of health care, education systems, access to clean water, the impact of the wars we fund and sustain, and increased food insecurity, may the faces of Rachel's children from Philadelphia to Aleppo, Flint to South Sudan, Standing Rock to Bethlehem affect us towards renewed activism rooted in gospel witness.

May we have the eyes to see the revealed star hovering over the parts of God's world where children are most vulnerable. Then, may we respond to this epiphany as we remember the kingdom of God belongs to these little ones. May we be willing to adjust course and lay down our very lives for their safety and security, for their future we dare not take away.
Posted by Greg Klimovitz
Labels: Advent, Epiphany, Gospel of Mark, Reformed Theology, Religion, Spiritual Formation, Vocation
Newer Post Older Post Home