A Tale of Two Parades...or Three: Revelation as March of Prayerful Protest

In the span of twenty-four hours, there were two parades.

One celebrated the inauguration of the 45th President of the United States and what we call the "peaceful transition of power." The pageantry was full of the sacred symbols and liturgical rhythms of the national religion we call American democracy, whose new priest walked the streets of Washington D.C. to sounds of both praise and disapproval.

The other hinged on peaceful protests and demonstrations in the name of women's rights and varied intersections with demands for justice for people of color, LGBTQI+, immigrants, the interfaith community, and more. The collective sense of urgency was no doubt heightened by the inauguration of Donald Trump just one day earlier, whose fear-based rhetoric, history of offense and abuse of women, and slander related to immigrants, Muslims, people with disabilities, and African Americans became the target of placards created by those who organized and exercised their right to demand better.

This parade was not without its critics, too.

There is no question, this nation is at a critical crossroads. The world as we know it is at a crucial turning point evident in this "tale of two parades."

And yet again, the biblical narrative cuts through the dualism of our world and temptations to bifucate solutions and offers a third way. There is a third parade, whose attendees are too vast to count and agenda unapologetically tilted towards those slain by all systems of power and privilege. This march of holy protest assures us dreams for a world made whole, right, and just again cannot and will not be overcome by the powers that be; there is a different reign breaking in that trumps all others.


"Then I looked, and I heard the voice of many angels surrounding the throne and the living creatures and the elders; they numbered myriads of myriads and thousands of thousands, singing with full voice,


'Worthy is the Lamb that was slaughtered to receive power and wealth and wisdom and mightand honor and glory and blessing!'

Then I heard every creature in heaven and on earth and under the earth and in the seam and all that is in them, singing,


'To the one seated on the throne and to the Lamb be blessing and honor and glory and mightforever and ever!'

The pageantry of this apocalyptic parade is laced in subversive imagery (see also Revelation 4). John borrows the imperial symbols, traditions, and religious iconography that surrounded the inauguration of new "leaders," who claimed divine status and appointment, threatened detractors, and crucified criminals and "fake-news" subscribers (read: those who spread a gospel not in line with Rome) as testament to their fragility and insecurity. John countered with an alternative parade and a subversive anthem of allegiance echoed by resistors the powers thought they had silenced. At the apex of this holy occasion, the Elected One, the Lamb, takes the scroll as the elders fall in worship, harps in hand, and offer "bowls full of incense, which are the prayers of the saints” (Rev. 5:8).

We can only imagine the content of these bowls full of prayers offered by leaders of the faithful resistance in the midst of rampant militarism, religious persecution, abduction of detractors fed to lions, an economy based on slavery and unjust tax systems, reduction of women and children to subservient status, fear of the foreigner, and legislation that segmented the elite from the poor and hungry. Surely these ancient petitions would have been an encyclopedia of their times as told from the vantage point of the empire's underbelly. They could have been colorful placards of early protest movements led by those victimized by the beast.

This context breathes a level of comfort to those looking for time-tested solidarity. 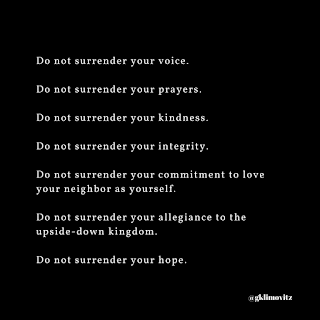 In our day, there is great energy swirling around current socio-political events and the American election. For some, this energy has leveraged a particular brand of change and thirst for ideological return. For others, the energy is fueling a fire that threatens to burn quests for social progress and equal opportunity that have been pursued over the last several generations. So the masses have taken to the streets.

What John reminds us is neither to be overcome by despair nor provoked by emperor and empire to replicate the very evil we despise. Instead, we are to offer our prayers of protest and organize labors for justice and peace, even join varied marches, as such actions are gathered in bowls of incense before the throne of the Lamb. There we find an Elected One, surrounded by leaders of the faithful resistance, most able to identify with those victimized by the powers who then promises a universal resurrection he has already inaugurated.

So faithful saints, in our quest for justice and peace, let us pray fervently as we march onward and refuse to let our placards be the end of our advocacy. And let us do so in a way that pledges allegiance neither to a party nor flag, but to the Lamb of God who alone is able to take away the sins of the whole world.