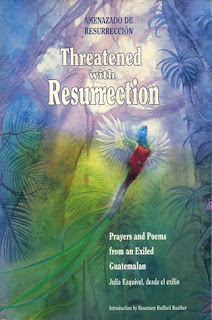 Every now and then you stumble on something and someone you know others have read, but wonder what took you so long to encounter for the first time. Last night was one such night.

As I read Julia Esquivel’s poem, “They Have Threatened Us with Resurrection,” I could not help see her lyric as pertinent for our time and various places 36 years later. In light of the endless streams of stories of despair and senseless violence (as if there was any other kind) near and far, the Guatemalan poet and theologian offers us a reminder that the greatest threat to our despair and the powers that be is the hope of the resurrection and the inability for death to ever have the last word. This was something Esquivel knew first hand, as the activist, poet, and minister was on the frontline of justice movements in the midst of political unrest and genocide in her beloved Guatemala in the middle portion of the twentieth century. Esquivel would ultimately be forced to flee her country in 1980 and find exile in, among other places, Mexico, Nicaragua, and a monastic community in Switzerland. Read more about this radical and revolutionary saint here.

Rather than butcher the beauty of the poetry through paraphrase and preface, read a portion of it below or the full text here. The poem comes from Julia Esquivel’s larger collection, Threatened with Resurrection; Prayers and Poems from an Exiled Guatemalan, Ann Woehrle, trans. (Elgin, Illinois: Brethren Press, 1994). As many preachers and teachers have already discovered, I am sure there will be need to revisit this piece come Easter.

"They Have Threatened Us with Resurrection" (an excerpt)

It is something within us that doesn't let us sleep,
that doesn't let us rest,
that won't stop pounding
deep inside,
it is the silent, warm weeping
of Indian women without their husbands,
it is the sad gaze of the children
fixed somewhere beyond memory,
precious in our eyes
which during sleep,
though closed, keep watch,
systole,
diastole,
awake.

Now six have left us,
and nine in Rabinal,
and two, plus two, plus two,
and ten, a hundred, a thousand,
a whole army
witness to our pain,
our fear,
our courage,
our hope!

What keeps us from sleeping
is that they have threatened us with Resurrection!
Because every evening
though weary of killings,
an endless inventory since 1954,
yet we go on loving life
and do not accept their death!

They have threatened us with Resurrection
Because we have felt their inert bodies,
and their souls penetrated ours
doubly fortified,
because in this marathon of Hope,
there are always others to relieve us
who carry the strength
to reach the finish line
which lies beyond death.

They have threatened us with Resurrection
because they will not be able to take away from us
their bodies,
their souls,
their strength,
their spirit,
nor even their death
and least of all their life.

Because they live
today, tomorrow, and always
in the streets baptized with their blood,
in the air that absorbed their cry,
in the jungle that hid their shadows,
in the river that gathered up their laughter,
in the ocean that holds their secrets,
in the craters of the volcanoes,
Pyramids of the New Day,
which swallowed up their ashes.

...Join us in this vigil
and you will know what it is to dream!
Then you will know how marvelous it is
to live threatened with Resurrection!
To dream awake,
to keep watch asleep,
to live while dying,
and to know ourselves already
resurrected!
Posted by Greg Klimovitz
Labels: Book Reviews, Liberation Theology, Modern Psalms, Prayers of the People, Religion, Social Justice, Spiritual Formation
Newer Post Older Post Home