From Polity to Pavement: Brief Reflections on the 222nd General Assembly 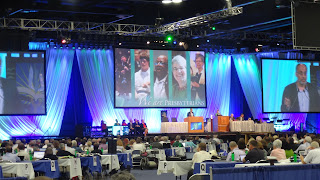 One of the privileges of being a General Assembly attendee versus commissioner is the chance to observe all the committees as they pour over the nearly 100 overtures requiring action. As I walked into room after room, I was blown away by the faithful conversations the church was having in regards to our local, international, ecclesial, financial, social, ecological, institutional, ecumenical, and theological witness.

While not all conversations were invigorating, "ho-hum" could be said about more than a few items of business, and disagreement was certainly present, each conversation was laced in the question- “what does this mean in light of the hope that is our calling as the church of Jesus Christ?”


The faithful actions of the Assembly, which are too numerous to account for fully in this blogpost,* enabled the Church to bear witness to God's love and grace, near and far. The Assembly elected two women as co-moderators and an African-American Stated Clerk, both firsts for our denomination as we change the face of our leadership. We embraced the Belhar Confession, pulling into the present Belhar's call to model the same unity, justice, and reconciliation in the midst of all that separates persons from one another in our given time and place. Said differently, Belhar is now us! 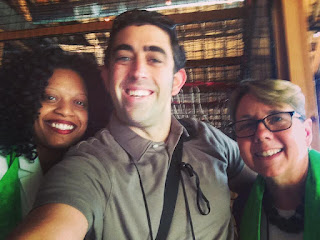 Our corporate and confessional voice called for the acknowledgement of harm done to LGBTQ/Q people, expressions of apology to Native Americans dishonored at the hands of our Presbyterian ancestors, and directed our Stated Clerk to request from the United States government an apology and statement of regret sent to the Republic of Korea in light of the known killing of Korean Civilians at the battle of No Gun Ri during the Korean War (history lessons are as much a part of General Assembly as anything else).

The General Assembly affirmed and simultaneously lived into our commitment to nonviolent means to alleviate oppression and injustice as we moved to divest from (or begin the process of) corporations that profit off violence and oppression in the Middle East and the exploitation of creation.  Our polity was even an agent of God’s grace and reconciliation as, after testimony from a Presbyterian minister who was sexually abused as a child by a chaperone at a PCUSA youth event, commissioners approved a Children/Youth/Vulnerable Adult protection policy to be implemented by all mid councils and mirrored by local congregations. Following the plenary vote, Stated Clerk Gradye Parsons elicited a tearful-apology and vowed to ensure the safety of all children.

The list goes on, sure to include the recommendation to address the increasing generational gap in our denomination, approve a new Directory of Worship and related inclusive sacramental language, and call for a commission to explore the PCUSA's organizational structure as we discern a new “Way Forward.”

After a week of committee work, thoughtful debate, pursuit of perfected motions (or substitute motions), and a crash course in Robert’s Rules of Order, there are many reasons to give thanks. But our gratitude calls not for rest from our mission. There is no time to bask in the light of our governance. Now is the time to move from polity to pavement with a sense of urgency and intentionality.

As I turned into the Presbytery office on my first day back, t-shirts with names of Philadelphians killed by illegal guns lined the intersection of Gowen and Stenton Avenues, a monument to the slain installed by our neighbor congregation. Yesterday afternoon was spent with a local ministry whose congregation consists primarily of people experiencing chronic street homelessness, a reality many of us witnessed and were overwhelmed by while traveling to and from the Oregon Convention Center.  The threat of deportation of undocumented immigrants continues to tug at the hearts and sense of call of our local pastors, whose immediate neighbors are affected by unjust legislation and Supreme Court decisions.  Yet another act of terrorism, this time in Istanbul, has resulted in all-too-familiar crafting of public prayers and hashtags of solidarity.

In the midst of it all, we have neither the time to revel in the strength of our ecclesiastical praxis nor become wearied by tired narratives of perceived denominational death. Stated Clerk-elect, Rev. Dr. J. Herbert Nelson, said it best, “We are not dying. We are reforming….church is not enough in this day. We need to set our aim on higher ground.” In his familiar prophetic cadence that will now shepherd our denomination, the newly-elected Stated Clerk reminded Presbyterians the same Spirit that resurrected Christ dwells within us as agents of God’s work of reconciliation and justice. 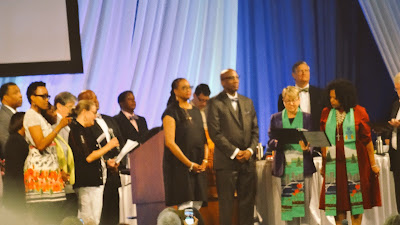