Fragrance of Grace and Resurrected Hope: Reflections on Mary's Anointing in John 12:1-8 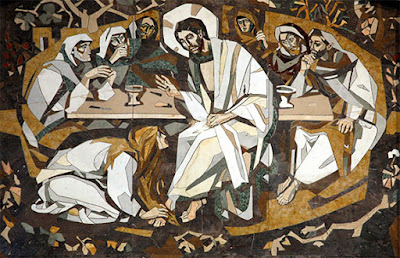 “Six days before the Passover Jesus came to Bethany, the home of Lazarus, whom he had raised from the dead. There they gave a dinner for him. Martha served, and Lazarus was one of those at the table with him. Mary took a pound of costly perfume made of pure nard, anointed Jesus’ feet, and wiped them with her hair. The house was filled with the fragrance of the perfume. But Judas Iscariot, one of his disciples (the one who was about to betray him), said, ‘Why was this perfume not sold for three hundred denarii and the money given to the poor?’ (He said this not because he cared about the poor, but because he was a thief; he kept the common purse and used to steal what was put into it.) Jesus said, ‘Leave her alone. She bought it so that she might keep it for the day of my burial. You always have the poor with you, but you do not always have me.’” (John 12:1-8)
“Why was this perfume not sold for three hundred denarii and the money given to the poor?" Judas sounds like those of us passionate about the stewardship of church finances and mission dollars. In light of downward economic trends, strenuous capital campaigns, and heightened sensitivity (read: anxiety) about where and how every budgeted dollar is spent, there is little to no room for random displays of extravagance.  That said, we might think this woman in John 12 was out of line and irresponsible.
Frankly, if I had been in the home of Lazarus, I would have likely echoed the rogue disciple. I would have been quick to remind the Teacher about how snatching bread and fish from a young boy to feed 6,000+ hungry neighbors (John 6:1-15) was inconsistent with this woman’s spilling of her assets for a foot washing. The 300 denarii surely could have benefited the revolutionary movement of justice and generosity far more than an adolescent’s bagged lunch.

And as the last words fell from my lips, my eyes would have met those of Christ. Who was I to challenge the generosity of this faithful disciple, whose name was Mary, as she washed the feet of her Teacher with her hair? How dare I question the integrity of Mary's public testament to the gospel she claimed as her own mere days after her brother, Lazarus, was raised from the dead? Was I paying any attention if I thought for a second Jesus was primarily concerned with or limited by denarii? In this moment, my self-righteousness masked as socially-informed piety would have been challenged, a la Judas, as a grand thief of grace and welcome. With my nose turned up, I would have missed the fragrance of resurrected hope that overcame any lingering scent of death and despair this family knew too well. Even more, I would have been ignorant of Mary’s newly empowered status as a steward of abundance in the midst of lonely narratives of scarcity, sorrow, and marginalization.

Sure, I would have been right about there being worthy neighbors able to benefit from these funds. I also would have been very wrong to dismiss Mary, as though she was not one such neighbor, whose story illustrated what the Psalmist wrote:

Lent, a pilgrimage over which the Spirit hovers, is hard. The related lectionary readings, which illumine our way to Holy Week, are complicated. The liturgical season questions us and dares us to turn away from self-righteous cynicism and towards an assurance that the very One who raised Lazarus from the dead and welcomed Mary at his feet has equipped us to practice the same resurrection and hospitality in our communities today. May the church never cease to do so as we dream alongside the poor and marginalized always among us as empowered stewards of God’s extravagant grace.  May God’s people fan their fragrance of resurrected hope in the midst of our wearied churches, communities, and world- even when such activity appears out of line, over the top, and irresponsible.
------
“However that may be, it is practical love for one’s neighbor which is played off against an act which can be made explicable only as an act of love for Jesus...What emerges clearly in all four accounts is that Jesus not only defends unconditionally the act of the woman but in all solemnity acknowledges that it is a good act which belongs necessarily to the history of salvation, even though it seems to be wholly superfluous, an act of sheer extravagance, which can serve ‘only’ the purpose of representing direct and perfect self-giving to Him.”
(Karl Barth, Church Dogmatics IV.2, p.797).

Notes:
*This post was originally published for the Presbytery of Philadelphia as part of the weekly Lenten reflections on the lectionary by the executive staff:
**Image above from the Basilica of the Annunciation in Nazareth
Posted by Greg Klimovitz
Labels: Karl Barth, Lectionary Reflections, Lent, Spiritual Formation
Newer Post Older Post Home