The Kingdom Belongs to Children: Belated Reflections on the Dark Side of Epiphany 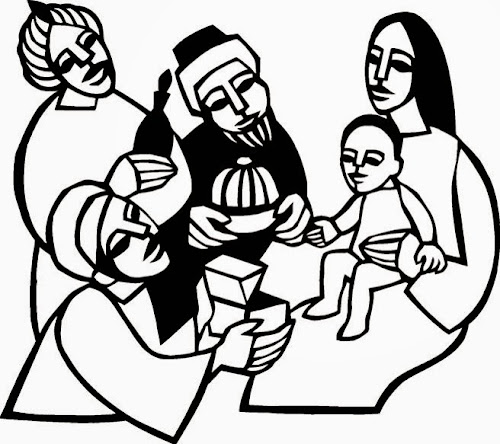 There's a dark side of Epiphany, the last of the liturgical twelve-day Christmas season. The reality is so dark that I am convinced I have buried the bitterness each January for most of my Christian life.

We rarely preach about this layer of the seasonal story intended to be holly jolly, where all is all calm, and not a cry is to be made.

If we are honest, as we head into the ordinary time sandwiched between Christmas and Lent, it's possible we intentionally avoid the tragedy on the heals of the wonderous encounter of three Magi from the eastern lands. If we didn't, Christmas would end on a sour note and linger far too long.

"When Herod saw that he had been tricked by the wise men, he was infuriated, and he sent and killed all the children in and around Bethlehem who were two years old or under, according to the time that he had learned from the wise men. Then was fulfilled what had been spoken through the prophet Jeremiah:

‘A voice was heard in Ramah, wailing and loud lamentation, Rachel weeping for her children; she refused to be consoled, because they are no more.’." (Matthew 2:16-18)

This is not exactly a preferred bedtime story to be read to young children during this holy season.

While we laud God who chose to become flesh and take on the form of a baby, the incarnation came at a cost. The response to the Christ child by those thirsty for power, or anxious about losing the power they already had, resulted in mass genocide of the holy innocents who stood in the way of and were deemed infantile conspirators against an emperor who wanted nothing to do with shared or surrendered power and influence.

It's like something straight out of The Hunger Games.

And while Mary, Joseph, and the newborn king may have been able to escape to Egypt and find refuge, Rachel and her children throughout the neighborhoods of Behthlehem were not so fortunate.

Then I wonder, is this precisely the story Jesus' parents told him every year when they celebrated or at least acknowledged his birth?

You can almost hear Mary whisper, unaware of her prophetic wisdom, "My son, you are our beloved. You are God's beloved. Yet your entrance into this world created quite a stir and has not been as beloved by the powers that press upon us from all sides. Many have already died so you may live, children even. Young ones like you. Never forget your life came at a cost. Never forget the babies of this world, the children of Bethlehem. So live and love, even offer up your own life, for all those who have already had theirs taken away. And never forget the children of Bethlehem."

Jesus surely clung to the wisdom of his mother as much as he probably recited the lyrics of the song she sang while pregnant, "[God] has brought down the powerful from their thrones, and lifted up the lowly..." (Luke 1:52).

It's no wonder Jesus, the Christ Child now matured Messiah, forcefully spoke these words to his disciples who had become a blockade to little ones in their thirst for power and privilege:

People were bringing little children to him in order that he might touch them; and the disciples spoke sternly to them. But when Jesus saw this, he was indignant and said to them, ‘Let the little children come to me; do not stop them; for it is to such as these that the kingdom of God belongs. Truly I tell you, whoever does not receive the kingdom of God as a little child will never enter it.’ And he took them up in his arms, laid his hands on them, and blessed them. (Mark 10:13-16)

Jesus never forgot the children. But do we?

I have served in youth ministry for over a decade and have been blessed by more than a fair share of first-hand kingdom encounters ushered in by young people. I have witnessed youth welcome strangers, donate their monies, advocate for causes of justice and peace, ask bold questions about the intersection of faith and current events, proclaim the good news from pulpit and through simple acts of service, develop mission partnerships locally and internationally, and even serve lepers propped up at cathedral doors in the middle of a market in Tegucigalpa, Honduras. I have laughed, wept, rejoice, and been left in awe by the witness of the church's children.

The same is true when I consider my own circus of three. The best theologians I know are my two sons and daughter. Their trust and curiosity is second to none. They have refused to link boredom with the biblical stories and instead regularly find something new and exciting in narratives they've heard a hundred times. They even ponder and question elements of the story I have never once considered despite a seminary degree and an endless collection of mind-numbing theology books.

Our children understand empathy, kindness, remorse, and lament in a way my adult heart has become all too hardened with age.

And when their brother was baptized yesterday, despite the hundred-plus eyes gazing at them during a shared melody, they laughed, played, and danced around the font fully aware, or at least aware enough, of the sacredness of what was taking place.

All this is true because the kingdom belongs to children, lest we never forget.

So may our work in church and politics, home and community, schools and volunteer work, worship and witness always seek the welfare of the children.

Let the church dare to challenge the systems of injustice and the corrupt narratives of our culture that so frequently rob the youngest among us not only of a bright future, but also of a safe and life-giving present.

Let the faithful followers of a crucified Messiah carry the cross of compassion and advocacy whenever we encounter such despair that infringes upon the health and wellness of children and their families.

May we consistently seek to include youth and children in all forms of our work and worship, they have so much to offer and teach us.

And whenever God's people are tempted to place power, privilege, finances, and security ahead of the gospel of prophetic risk and welcome, may we hear the same exhortation of Jesus delivered to his disciples so long ago.

It's only then that the darkness surrounding Epiphany can be overcome by the light of the star of Christ, whose kingdom belongs to the little ones of ancient Bethlehem and wherever we are today.