Beginnings of #icebucketchallenge: Reflections from a Charitable Cynic 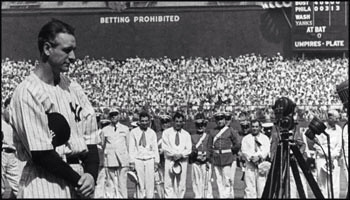 Let's be clear, I hate the New York Yankees. I despise the Evil Empire at the core of my being. I lump them right up there with insurance companies and cable television.

Then there was Lou Gehrig.

When I was in high school, I did a report on this pinstripe-wearing icon of both sports and medical research. I had a friend whose father passed away due to Amyotrophic Lateral Sclerosis (ALS) and wanted desperately to know more about what took his young life and raise awareness among my peers. The setting aside of hatred of the Bronx Bombers was hardly a sacrifice compared to the horrific nature of this disease now known by the Yankee legend's name.

The Iron Horse had set the mark of most consecutive games played, 2130 straight, until he could no longer play the sport he loved and mastered because of the effects of this disease. The record stood for over fifty years until an Oriole by the name of Cal Ripken, Jr. broke it in 1995.

While Gehrig was not the first to succumb to this mysterious neurological disorder, the first baseman became the face and name of the disease. Doctors and researchers alike invested increasing amounts of time, money, and advocacy in search of a cure for Lou Gehrig's Disease or ALS.

See the beginnings of #icebucketchallenge

I was cynical of #icebucketchallenge when my Facebook news feed became dominated by short videos of friends and acquaintances dumping buckets of ice water on their head. I also was anxious about being guilted into donations, reminiscent of old-school chain letters from the 90's.

I don't like forced charity. I cringe at new means to generate on-line narcissm. Trend drives me cray cray.

Slacktivism is no different.

I also felt #icebucketchallenge was a new way for teenagers and adults alike to sport their latest swimsuit attire, or lack thereof, for the whole on-line world to see.

So I hoped I would not receive a nomination. But I knew it was in vain.

I also knew my cynicism was, too.

So with my wife and kids' help, I took the challenge. Afterall, I want my children to embrace playful and more intentional, dare I say risky, social movements.

Sure, there may be better ways to generate awareness, raise funds, and advocate for victims of variety of causes and charities. But cynicism is not one of them.

So even if you do not have the funds, I challenge you to watch the video below, make a video of your own, and consider what other causes you'd like to champion.

Then get creative. Become an advocate. Get to know others who suffer at the hands of a wide variety of illnesses related to physical and mental health.

Because when you know victims, your cynicism begins to fade and compassion takes center stage.

Even if the most famous victims wear pinstripes.