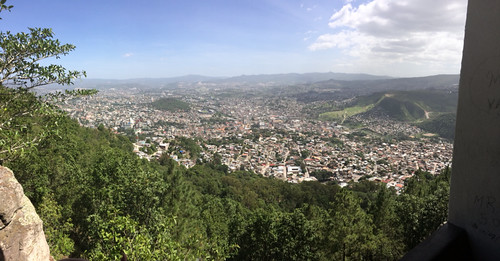 Our team was packing for our morning flight when friends from Tegucigalpa popped in for an evening surprise. They wanted to cap off a week of service, play, worship, and shared learning with some cake and conversation. As we celebrated year four of the growing youth-to-youth missional partnership between the Presbytery of Honduras and the Imago Dei Youth Ministry, one of the leaders offered an honest reflection and bold request.

"When your family and friends google Honduras they will learn about murders, poverty, corruption, and difficulties with education. Please share with them the good news about Honduras, too."

So, here's the good news.

Honduras is a beautiful country. The landscape and vegetation begs the question, is this what Eden was like?

Honduras is saturated with passionate churches whose members demonstrate what can and should happen when God's people share the burdens of one another and hold all things in common.

The youth of Honduras are eager to engage broader visions of what it means to be called a community and congregation at the forefront of God's mission in and for the world. These same young people are even asking questions about how to begin conversations about justice advocacy, peace making, and social development.

I also have strong friendships with Hondurans who long to become pharmacists, oncologists, engineers, and social workers so they can improve the country they call home and the livelihoods of those whom they call neighbors.

Hondurans also know how to have a good time. Want evidence? Just check out the video of our week together.

Now for the bad news, in case you did not already know.

Honduras has become synonomous with instability, injustice, drug trafficking, police corruption, economic distress, political perversion, and a national government unable to make significant dents in any or all of the above. This beloved nation, and my home away from home, has even earned the dreaded title, "murder capital of the world."

You could say Honduras is a developing nation whose socio-political development is slow at best.

These are all reasons why unaccompanied children are fleeing at such a rapid pace. Despite the rumors to the contrary, Honduran parents are sending their kids on dangerous pilgrimages to surrounding nations like the United States not as hopeful immigrants but as desperate refugees.

While we may be tempted to once again use these young ones, to whom the kingdom of God belongs, as pawns in another political game perpetuated by the media, the issue at stake here is not immigration reform.

We are talking about a refugee crisis. Many Honduran parents believe there is lower risk in shipping their children off to either a neighboring nation or one a flight away versus remain in their neighborhoods where violence is on the rise.

So while we may want to focus on American legislation and rash policies and procedures for deportation, you can't cure cancer with Tylenol. If we make this issue only about us as Americans and our bent in one partisan drection or another, parents of these children will not stop their pursuit of the safety and future of their children. They will just find other and, quite possibly, more detrimental alternatives.

That's because, by and large, these families are not looking for American citizenship or tax-free employment, rather praying for relief and rescue of their kids whom they love. Which means our focus as individuals and communities, churches and politicians, must become the growing tumor of violence in Honduras that breeds on internal socio-political corruption and results in unaccompanied child refugees. We must also explore ways to exercise hospitality and extend international pastoral care until a cure is found.

If we make this about anything else the result will be catastrophic, leaving thousands of children as victims of a poorly played political game.

I can't imagine news any worse. I want good and even better news for Honduras. So do my friends.