Reflection on Last Night's Jars of Clay Concert: Are They Still Relevant?

I spent my Palm Sunday with nine others from my congregation, to include a handful of high school students, at The Shelter Tour, a montage of performances by Audrey Assad [1], Matt Maher, Derek Webb, and Jars of Clay as the headliner band. And the evening was filled with nostalgia. First, I was able to revisit my alma mater of Eastern University. I have been on campus several times over the past year, to include my first opportunity to teach as a substitute for an Urban Youth Ministry Course. Every time I leave with the same thoughts: college students are sooo young and the Eastern world is sooo small. In other words, it does not take long for one to return to the pristine campus and be recognized, remembered, and/or encounter a former peer who is now employed by the student development office (how do you think I got my tickets?). Eastern University is indeed a small world…but it is one that I am grateful to live close enough to revisit with regularity.

As I sat in the EU gym, I could not help but hear echoes of the makeshift student section hopelessly cheering on the Eagles basketball team, not to be outdone by the aged Tony Campolo, who was unashamed to give referees a piece of his mind (I hear he still does). I remember my attempts at fade away jump shots in intramural basketball games, a proud member of the Dirty Doaners. I could even hear the ping of the aluminum bat and the pop of my catcher’s mitt as I participated in another 6 a.m. indoor practice for our, also hopeless, D3 baseball team. And as I sat in the front row of the bleachers last night, I also was in full view of the many springtime relationships that were in full bloom amidst the crowd on the gym floor. And I wanted so desperately to warn them that summer break is about to come and, well, their freshman relationship may not make it and that’s o.k. because, my friend, sophomore year is on the horizons…

Second, the opportunity to listen to Jars of Clay perform a diverse collection of newer and older tracks was the most nostalgic experience of all. And, yes, they performed “Flood.” Ironically, last night marked 15 years since that album, and related hit single, was released. When Haseltine announced this, one of my students turned around and said to me, “I am 15.” Has it really been that long? I remember like it was yesterday, belting out, “rain, rain on my face” and “I want to fall in love with you,” as if I was in the studio alongside Dan Haseltine (shameful, I know). And yet, even after 15 years, Jars of Clay continues to release new albums, compose new and poetic lyrics, and raise social and political questions in regards to the gospel. This begs the question, is Jars of Clay still relevant? Maybe? While my students may not be able to recognize “Worlds Apart” or the lyric, “she sits in fields of wildflowers,” they are interested in the message and mission of The Shelter project…and so am I.

However, as a good friend of mine and I discussed the show as it unfolded, we were blown away at how much Jars has evolved over the years, not only in age and content, but also in style and focus. They have changed as the culture has changed. And while they may still be a sort of “Christian” band, they are not as settled as they once were. In fact, they seem to embrace ambiguity, celebrate paradox, underscore dialogue, and long for a life that bears fruit into the world versus appease a particular wing of the CCM industry. Lead singer, Dan Haseltine, said last night, “the greatest command is not about being right. When we stick our flags in the ground and claim a territory we move away from conversation and love and towards defense. The Christian faith is much more about a journey through mystery versus an arrival at a particular destination [i.e. intellectual, theological, political, etc.].” Then, with all the participants from The Shelter Tour, to include Audrey Assad, Matt Maher, and Derek Webb, they proceeded to perform one of their more poignant and newer songs, “Eyes Wide Open”:

So God bruise the heels we've dug in the ground
That we might move closer to love
Pull out the roots we've dug in so deep
Finish what You've started
Help us to believe…
We can't go on, seems this conversation's done
It's so hard to win these fights and love You at the same time
So take my hand till grace makes a way to bend
Till the things I said to ruin only lead to my own end…
Draw us in, send us out…
Help us to believe

Again, is Jars of Clay still relevant? Maybe? Yet, this raises a much larger question, is the “Christian” music industry still relevant? Is contemporary Christian music (CCM) tired and endangered? Even more, is this endangerment really a problem or a gift of the Spirit? Relevant Magazine recently wrote:


“In 2003, the number of artists who were Christians and making music outside of CCM was pretty small. You had people like MxPx and Sixpence None the Richer who would talk about not wanting to be labeled a ‘Christian band,’ but not many others. Then in 2005, Sufjan Stevens released Illinois and suddenly Christians were seriously considered as artists. Christian artists seem to be popping up everywhere- bands like Cold War Kids, Mute Math, Shad, the Avett Brothers, the Civil Wars and Switchfoot have all had critical and commercial success. Christians have successfully moved out of the faith ghetto and into artistic merit” (March/April 2011). [2]

If you follow any of my blog you may know of some of my recent musical interests, particularly Mumford & Sons, who will not be seen at Creation or Purple Door Festivals, rather Lollapalooza and Bonaroo. And I prefer their music… 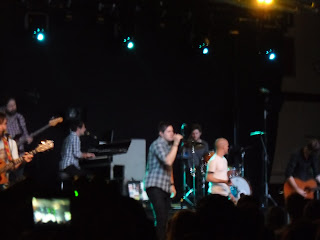 Nonetheless, there is something to be said for Jars of Clay, and my preferred, Derek Webb. [3] They have credibility with the church (depending on who you talk to), whose people may benefit from their message, craft, and approach in a way that would not be feasible if the CCM market completely died. And in a way, Jars is still relevant for that very reason.

So while my students may not always know of Jars of Clay, or worse, Derek Webb, I will still take them to their concerts, because I think their voice and witness is still relevant.

Notes:
[1] Assad said something profound last night, "Love is self-donation.  This is particulalry difficult when love is young."  This remark was in reference to here recent marriage; however, I think the implications are much broader...

[2] See also their column, “2011 Could Be the Year When CCM As We Know It Disappears (except for Worship Music],” in the same issue, “The number of people who exclusively listen to Christian music gets smaller every day, which takes some of the security out of solely being a musician in the industry. You might not be able to make money just off Christians anymore, which sort of spells doom for the business model as it currently exists. There is, however, an exception: worship music” (p. 77). See digital issue: http://www.relevantmagazine.com/digital-issue-50

[3] I say this in full recognition, and in light of personal conversations with Derek Webb, that neither he nor Jars of Clay consider themselves a "Christian band."  Instead, they are confessing Christians who make music for a living.  This is an important departure from the previously-held notion that an inanimate object, i.e. music, could be "Christian."  Furthermore, Webb made a great comment in reference to his recent Feedback album, that music is just another means for confessional language, whereby he sometimes prefers such language to be void of lyric and much more mysterious and messy.
Posted by Greg Klimovitz
Labels: Culture, Current Events, Just for Fun, Plurality of Truth, Youth Ministry
Newer Post Older Post Home