When Your Daughter Finds a Statue and Challenges All You Know: A Belated Mother's Day Post on (Indigenous) Womanhood

A few week's ago, our family went for a Mother’s Day walk along the Schuylkill River trail in Philadelphia. Among all the art, historical storyboards, gardens, skate park, and graffiti, were an abundance of statues- mostly celebrating white male “contributions” to this nation. Shocker.

Then there was this one, which encompasses strength, resilience, resistance, and a “we can do all the things” spirit. I confess, I have run past this statue infinite times. I have never once stopped to ponder the significance. I don't think I actually knew it was there at all. It took my ten-year-old daughter to linger in the subversive structure as ode to peoples long oppressed, whose ancestry names so many of the places throughout Greater Philadelphia. Contrasted to the over-feminization with pink, tired gender stereotypes and binary tropes often associated with Mother's Day, I believe Boyle’s description of “Stone Age in America” (1887) says it better:

“You’ll see a bear cub at the Native American woman’s foot, but in effect, you have to look at her threats being governmental and military. The least of her worries would be a bear.”  (Read more here.)

Yes! to this brand of motherhood, which works against the many forms of injustices, isms, and oppressions in a still-very-much patriarchal world- all the while caring for their own families. Yes! to this bold elevation of indigenous peoples, especially women, whose stories cry out from this land that is not our land. Yes! to these narratives that often go, not so much untold, rather unheard and dismissed in the name of Western White propaganda of colonization. We must be better at this truth telling, which is often modeled best by the soft hearts and prophetic imaginations of our youngest, children who dare pause and ponder bronze beings on trails previously traveled yet ignored by generations before them. This is our broken, beautiful, and tragic history we must sit with and and learn from- even when on family walks along the river. Kaitlin B. Curtice uncovers this confessional and reconciliatory wisdom in a book our Presbytery is presently reading, Kaitlin B. Curtice, Native: Identity and Belonging, and Rediscovering God: 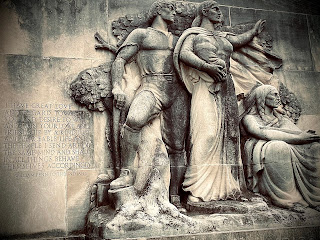 "In my life, journeying has meant telling the truth, coming to terms with the trauma in my own story, and leaning into the trauma and pain of others with honest listening so that, together, we learn how to be a people who walk alongside one another in order to heal."

So how might we work towards such truth telling, story sharing, and celebrating of our indigenous siblings past and present, whose land we call home. In so doing may we acknowledge the trauma and pain, courage and resilience able to lead us towards justice and healing across intersectional lines related to gender, ethnicity, culture, orientation, race, religion, and so much more.