Thanksgiving, Privilege, and #Ferguson: What We Can Learn from 10 Lepers in Luke 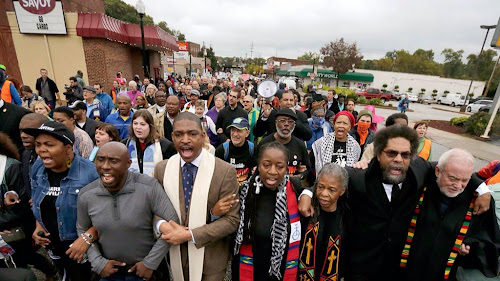 I watched the unfolding of the Ferguson Grand Jury's decision in the comfort of my home with a newborn baby resting peacefully on my chest. I was able to lament in luxury and from a position of privilege.

That's because I am not Michael Brown. I also am not Trayvon Martin. I am white. I am male. I am privileged.

But I am not shocked. While it is rare for a Grand Jury not to return an indictment to the prosecuting attorney, which simply would allow for this case to go to trial, I was not surprised the group selected chose to be one of the few to do so.

We would like to think the walls of division all around us are crumbling, but the reality is bricks are being added vertically and horizontally every single day. Whether it's race, religion, sexual orientation, ethnicity, or political affiliation, segregation continues to plague our nation, world, and even sanctuaries. We are a divided people and neither the setting fire to local businesses and police cars nor the refusal to take this case to court will further progress our communities towards the reconciliation and peace we all long to be the fabric of our future.

We can do better.

It's interesting that the decision not to indict Darren Wilson came on the Monday of Thanksgiving week. The temptation, as a white male situated in the suburbs of two Pennsylvania cities, is to watch the events unfold and hang my hat on gratitude and be thankful.

I could give thanks that when I get pulled over for speeding, which happens at least annually, other assumptions and suspicions are not cast upon me based upon the pigment of my skin.

I could give thanks that when I walk my dog late at night or in a parking garage after shopping, those who pass by me in my hoodie don't assume I am an aggressor.

I could give thanks that I have never had difficulty finding a job because of my skin color or gender.

I could give thanks that I do not know the pain of Michael Brown's parents that lead them towards both longings for four-and-a-half minutes of silence en memorium or to seek vengeance on those a part of an egregious decision by the Grand Jury.

I could give thanks that I have never experienced something in my life that has tested my commitment to nonviolent resistance or even to want to act out on deep-seeded rage.

I could give thanks for all the privileges I have not earned but simply assumed, thanking God I was neither born black, gay, middle eastern, Muslim, or even female, but then I would simply widen the gap and add to the piles of bricks that continue to work against any and all forms of reconciliation.

That's because we give thanks not in contrast to the circumstances and experiences of others, we give thanks as a means to link arms with the God who made all of us. Our gratitude is cruciform and moves us towards solidarity with all of those who suffer in silence, long for justice, work for peace, and protest the many manifestations of corruption and oppression near and far.

Thanksgiving is not about feasting on our privilege but leveraging it for the sake of the other.

All ten were reconciled and made whole. All ten were set free from their identity as a marginalized people group. All ten were made new by the One who was in the process of making all things new and right again.

But only one, a foreigner from Samaria, returned to the source of reconciliation and gave thanks. Only one fell facedown in worship and identified with the One who could use this healed leper to extend the same sort of healing towards others. Only one was thankful and chose to link arms with the mission and movement of the Messiah.

Only the man from the margins understood and so was charged by Jesus, "Get up, rise, be on your way. Your faith has saved you. Resurrection has happened in you. Practice resurrection all around you. No longer keep your distance from me but draw near to the kingdom and those like you who are invited into it."

The other nine kept their distance. They were set free from their marginalization and chose to cling to their new privileges. It's quite possible they even returned to the temple priests, declared their gratitude from afar, and returned to full participation in the religious community. How quickly they forgot their Master and Teacher who healed them and those on the fray and a part of their leper colony.

Are we the same? Do we merely give thanks from a privileged distance versus living out of our gratitude as we link arms with Jesus and those to whom he identified? Do we respond to embarrassing dismissals by Grand Juries with acts of violence and vandalism so distant from the teachings and witness of Jesus and wreak havoc on small business owners part of the same marginalized groups seeking justice? Do our faith communities even talk about what is taking place in our country this week or do we give thanks from afar, grateful we do not live in Ferguson, Iraq, Israel, Palestine, Coatesville or other parts of the world torn by violence and injustice?

Do I keep my distance because now is not the time and there are others more capable, whose life circumstance more susceptible, to truly work towards change?

If we believe in the resurrection and long to have any part in it, our discipleship and life as those who follow Jesus begins with gratitude to God; it's what we do when we worship. When we give thanks and worship, like Luke's Samaritan, we no longer keep our distance rather link arms in faith with the God who made us in the beginning, reconciles us in the person of Jesus, and sends us by the Spirit on our way to use all we have and all we are to be God’s generous, gracious, and just people in and for the world. We live graciously out of our thankfulness, which moves us out of our privilege and towards those all too familiar with exclusion, injustice, prejudice, discrimination, and systems bent against them and others in their communities.

This Thanksgiving I pray I would do the same.

Only then will I truly demonstrate my gratitude, even within the comfort of my home with a new baby yet to be discouraged by the despair of yesterday.

A Sad Night in America by Jim Wallis

Photo above is a peaceful demonstration by varied persons of faith, including Cornel West and Jim Wallis.