Job and Jesus at the Dump: Suffering Part 2 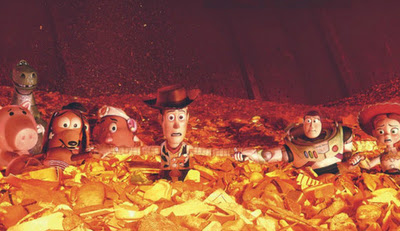 There's an epic moment at the end of Toy Story 3. (Don't judge my current movie and media references, I have young kids, my wife is pregnant, and I now drive a minivan.)

Buzz, Woody, Jessie, and their entire network of toy heroes are about to be consumed by a fiery furnace at the local dump. While at the top of the trash heap, they brace themselves for inevitable destruction on the heals of their greatest adventure to date.

They no longer speak.

They have surrendered their visions of some sort of dramatic escape.

They know there are no plans for Toy Story 4 and so have lost all hope.

As their garbage pile moves closer and closer to the edge, the friends silently link arms, grasp hands, and gaze into each other's eyes as a final digital display of solidarity.

A pretty dark and dramatic moment for a kid's flick.

It's also what came to mind when I thought of another story whose characters suffer in silence upon different trasheap of despair:

"Satan left God and struck Job with terrible sores. Job was ulcers and scabs from head to foot. They itched and oozed so badly that he took a piece of broken pottery to scrape himself, then went and sat on a trash heap, among the ashes...Three of Job’s friends heard of all the trouble that had fallen on him. Each traveled from his own country—Eliphaz from Teman, Bildad from Shuhah, Zophar from Naamath—and went together to Job to keep him company and comfort him. When they first caught sight of him, they couldn’t believe what they saw—they hardly recognized him! They cried out in lament, ripped their robes, and dumped dirt on their heads as a sign of their grief. Then they sat with him on the ground. Seven days and nights they sat there without saying a word. They could see how rotten he felt, how deeply he was suffering."

This ancient story reminds us sometimes there are no words in the face of death, dying, and human suffering. While we may be tempted to promote our carefully crafted theologies, unleash clever Christian cliches, and defend God and all related God speak we have been taught since childhood, there are moments when silence is best.

I only wish Job's friends would've stopped there. I wish they would've ended with their decision to dump dirt on their heads and practice the presence of the God who hears more than speaks. I wish the three ancient theologians would've been willing to bypass rigid quests for certainty and reason and embrace mystery in the midst of a friend's misery.

I wish they would've remained silent.

But I'm glad Job didn't. I'm grateful for the pages that turn rather quickly as Job confronts the very God who has apparently permitted his agony, which will never sit well with me. I am grateful Job gives vocabulary to the emotions I have felt in moments of anguish. Job even permits us to challenge God's (lack of) involvement or concern. I am grateful Job freely vocalizes his rage. I am grateful God listens, too.

I am also grateful for another dump of despair outside Jerusalems city limits:

"The soldiers brought Jesus to Golgotha, meaning "Skull Hill." They offered him a mild painkiller (wine mixed with myrrh), but he wouldn’t take it. And they nailed him to the cross. They divided up his clothes and threw dice to see who would get them...At noon the sky became extremely dark. The darkness lasted three hours. At three o’clock, Jesus groaned out of the depths, crying loudly, "Eloi, Eloi, lama sabachthani?" which means, "My God, my God, why have you abandoned me?"

We frequently look to the cross as a symbol for the sin of the world. We see the crucifixion as synonymous with other words like forgiveness and atonement.

But what about the cross as a witness to a God who not only saves but also suffers and dies? What about Golgotha, a trash heap on the outskirts of Jerusalem, as another Job-like encounter with the garbage of death, dying, and a world caught within the grips of evil and injustice?

What about the cross as a grand mystery that dares us to sit in silence and ponder the meaning of the Messiah's most difficult question, "My God, my God, why have you forsaken me?"

There are enough people ready and willing to respond to a suffering world with pat answers, carefully-constructed statements, and well-intentioned theological systems. But I wonder, are there even more willing either to sit in silence alongside those who grieve, crucifying a lust for controlled rationale or still more faithful enough to venture alongside others who suffer in silence and pray for someone to speak up as advocates for their deliverance.

Teenagers seem to have a knack for this sort of ambiguous confrontation with pain and heartache.*

Maybe that's because they have a hunch that this is what the cross is all about. Maybe they know this is what it means to carry one in a world with more than a fair share of Golgothas.

Still, Job and Jesus at the dump are not overcome by darkness. If we linger in the story long enough we encounter a God who carries and buries the sufferings of this world in the cross of Christ. God doesn't bury our suffering so to dismiss, hide, or increase divine apathy and ignorance. Rather, like a careful and confident gardener, God plants the seeds of our sorrows in the soil of God's promise with full awareness that in time new life can and will sprout.

This will be true for all of us, indeed true of all creation.

But until that day, sometimes all we can do is sit by the dirt and quietly wait.

Or get our hands dirty and plant seeds of justice and peace.

But we clasp our hands and wait nonetheless.

On Job by Gustavo Gutierrez

Adolescence and the Stewardship of Pain by Frederick Buechner

Is God to Blame? By Gregory Boyd

Why Does Life Hurt So Much Sometimes? Suffering Part 1

*"Let me suggest with total inaccuracy that the word adolescent is made up of the Latin preposition ad, meaning 'toward,' and the Latin noun dolor, meaning 'pain.' Thus 'adolescent' becomes a term that designates human beings who are in above all else a painful process, more specifically those who are in the process ofdiscovering pain itselfoftrying somehow to come to terms with pain, to figure out how to deal with pain, not just how to survive pain but how to turn it to some human and creative use in their own encounters with it. Thus adolescents, as in the official etymology, are ones who are growing to be sure but who, in terms of my spurious etymology, are growing in this one specific area of human experience."

Frederick Buechner, "Adolescence and the Stewardship of Pain"