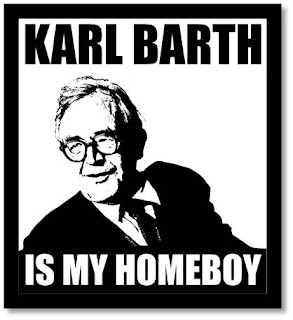 I have just completed a parousing through Volume IV.1 of Karl Barth's, Church Dogmatics.  A pilgrimage through this hefty, dense, and still more beautful witness to the reconciliation of God in Christ is not pursued by many.  I understand why- it's heavy.  While the Swiss theologian intended his work for the church, even for the sake of lay praxis, it is no easy task to read any portion of the Dogmatics. Still, I find Barth's work not only extremely relevant for the missional church in the emerging culture, but also deeply practical for those who long to live into the hope of the gospel.

That said, I thought I would post a few nuggets of wisdom sifted from the pages of IV.1.  Most will never read the entirety of any one portion of a volume, let alone the totality of Barth's collection.  I am not sure I ever will...or even should. So, maybe a sort of Cliff's Notes will be advantageous for those interested, as well as for my own reflections post-reading IV.1...especially as I move on to IV.2.

Side note: I have recently discovered an incredible website developed by Barth's great-granddaughter and endorsed by the Karl Barth Foundation: www.kbarth.org. This site provides endless resources, videos, bios, collections, etc.

"The only answer to χάρις is εύχαριστία...χάρις always demands the answer of εύχαριστία. Grace and gratitude belong together like heaven and earth. Grace evokes gratitude like the voice of an echo. Gratitude follows grace like thunder lightning" (41).


“Reconciliation is God’s crossing the frontier to man” (82).

“[The verdict of God] declares that God receives man, and that man in accordance with his election and institution as a covenant-partner- can confess himself a faithful servant of God, His recognized friend and well-loved child” (94).


“Jesus Christ is God’s mighty command to open our eyes and to realize that this place is all around us, that we are already in this kingdom, that we have no alternative but to adjust ourselves to it, that we have our being and continuance here and nowhere else. In him we are already there, we already belong to it. To enter at His command is to realize that in Him we are already inside. To follow His invitation and demand is to find ourselves in the situation already created in Him and in Him already our own situation. That is man’s reconciliation with God in the form of the issuing and receiving of the divine direction” (100).


"Christian love as the complement of love to God is real neighbourly and brotherly love to the extent that it is exercised without any ulterior thought or question, being shown freely and purely to the neighbour as neighbour and the brother as a brother, being shown only because in his Christian and also in his non-Christian form he is a member of the people of which Jesus Christ is the King...Where love exists in both dimensions without any ulterior motive, where it is grounded in itself and does not try to be anything but a necessary response to the love of God, it is that 'fulfilling of the law' of which we read in Mk 12:29 and Rom 13:10" (107).

“As such and with independent truth and power calling is man’s forward direction to God as his future, his new creation as a being which not only derives from the sentence of God in faith and is placed under his present direction in love but beyond that receives and embraces His promise in hope, looking forward therefore and moving forward to Him” (109).

"[Christians] do not merely live under the promise, which could be said of all men [and women]. They live in and with and by the promise. They seize it. They apprehend it. They conform themselves to it. And therefore in their present life they live asthose who belong to the future"(120).

“Because and to the extent that he is mighty in the community by His Spirit, that which [the church] does can and must be done with joy; its worship, its order, the fellowship of Christians, its mutual service, the celebration of the Lord’s supper, even its teaching and theology can and must take on the character of a festival; and in it all God can and must be thanked and worshipped. What we have to show is the fact and way in which the Church has never to look after itself, to build up itself, to rule and maintain and defend itself, but simply to live according to the direction of its Lord and His Spirit and in that way to be vigorous and active and truly alive” (152).

“It is now actually the case that in [the church’s] particular existence it stands vicariously for the whole world…Its members are men who can hope on the basis of the promise. But if they hope seriously, they hope in God, and in God for the world- for themselves, too, but for themselves as those who belong to the world which God has reconciled with Himself in Jesus Christ. They hope to see this the case, i.e., to see the world- and themselves with it- fulfilling its being in the service of God” (152).

“[The church is] a missionary community; a community which is responsible and looks and points forward in face of every development in state or society; an element of prophecy in relation to the world, of greater and smaller rest and unrest, of soberness and daring confidence in relation to the ultimate, and also and for that reason to penultimate horizons” (153).

“[The Church] has to remember that it is not itself God but is responsible to God, that it does not have the last word. But with this reservation in relation to itself, with a consciousness of the relativity of its decisions, their provisional nature, their need of constant reform, standing under and not over the Word it can go to work with quiet determination, accepting the risk, but with the courage and authority of faith and obedience…” (660).

“Each community has its own locality, its own environment, tradition, language, etc. But in that locality, as established and appointed by the Lord of all communities, it should be the one complete community” (672).
Posted by Greg Klimovitz
Labels: Book Reviews, Karl Barth, Missional Church, Reformed Theology
Newer Post Older Post Home