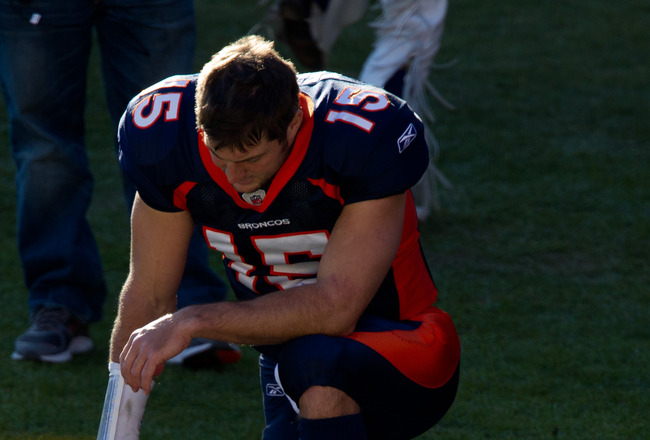 I have a confession: Tebow Mania has won me over. I have become enamored with the young phenom's ability to win despite critics and cynics, to include his coach and John Elway.  While I am not convinced that Tebow will be able to have a long and successful NFL career as a prolific pocket passer, his reverse-Lebron performances (i.e. absent for three quarters, come up big in the fourth) have proven that there is something about this kid that enables him to win games.[1]
Some have called it magic.


Others attribute it to his faith.


All find it difficult to explain.  Tebow is unorthodox in technique.  Timmy T is awkward and even slow in his delivery.  And when it comes to his uncanny leadership, selfless demeanor, and ability to win, win, win, the Gator turned Bronco, born in the Philippines to missionary parents, is the byproduct of some of the most unnatural skill sets the NFL has ever seen.


And no one is quite sure what to make of it.


Something else may seem quite unnatural, certainly not normal- reading the Apocrypha as an Advent discipline.  That's right, I decided to read what was going on in-between the Testaments that provided context for the first Christmas.  So I am plowing my way through 4 Maccabees, an anonymous portion of Christian Scripture (according to 2/3 of the Christian church)[2] that underscores God's gift of reason:

"Now when God fashioned human beings, he planted in them emotions and inclinations, but at the same time he enthroned the mind among the senses as a sacred governor over them all. To the mind he gave the law..." (2:21-22).

The author(s) proceed to illustrate, through various athletic metaphors that bear resemblance to Pauline writings, the vitality of reason in the training of God's people for witness, mission, and life lived in the economy of God. This is especially pertinent as Maccabees builds towards the narration of seven brothers martyred by the evil Antiochus IV Epiphanes, whom some have labeled as the first Hitler.  In other words, the essence of Maccabees is to goad God's people towards faith and reason found in the Law that may be quite unconventional and unnatural:


"Thus as one adopts a way of life in accordance with the law, even though a lover of money, one is forced to act contrary to natural ways and to lend without interest to the needy and to cancel debt when the seventh year arrives...It is evident that reason rules even the more violent emotions: lust for power, vain glory, boasting, arrogance, and malice" (2:8,15).

...to act contrary to natural ways.

Yes, this is the mandate of God's people whose minds are governed by the reason of God.

And God's reason is quite unnatural.

The Advent of Christ and all that surrounds it- quite unnatural.

A virgin pledged in marriage conceives the promised Messiah.

An elderly woman and her priestly husband shamed by infertility give birth to an unconventional prophet.

Shepherds as visitors to a manger maternity ward.

Magi and wisdom teachers from the East, a land known for its oppressive history towards God's people, bring gifts to this child and reroute in order to avoid an oppressive Roman emperor and his malicious plan.

Even more, the message and mission of this Christ child who grows into his Messianic identity- unnatural.

Sell all you have and give to the poor.

If you want to save your life you must lose it.

Love your enemies, pray for those who persecute you.

Blessed are the peacemakers, they are the children of God.

Woe to the rich.

Turn the other cheek.

Give your cloak, too.

Crucifixion at the hands of an oppressive empire.

Resurrection as hope for us and the whole world.

This is the reason of God-in-Flesh.

This is the mind of God that governs the Messianic passions.

We, too, are to have the mind of Christ.

Tebow. 4 Maccabees. The Advent of Christ.  Unnatural, yes.  Yet maybe that's how God has, is, and always will move in and through the faithful. May we have the eyes to see and the ears to hear how we may be called this Advent, Christmas, and everyday thereafter, to live into this unnatural kingdom of God.

Notes:
[1] As an aside, I actually agree with commentators who suggest that if Tebow did not have such a gifted defense and a kicker who was able to boot it through the uprights from 59 yards out, that we may be saying different things about Tebow and the Broncos.  However, Tebow is the first to turn attention those same players, "It's not Tebow time; it's Bronco time."

[2] Catholic and Eastern Christians incorporate the Apocrypha in their canons.  That said, I find it my Christian obligation to at least explore the texts that many of my christian brothers and sisters consider to be inspired and sacred texts.

[3] A great way to pursue unnatural Christmas giving is through the Advent Conspiracy, or your own variation: http://www.adventconspiracy.org/