July 21, 2011
Typical with most of my experiences in Latin America, when we arrived at the Tegus Airport we were greeted with extreme hospitality. Mark Wright, a PCUSA mission co-worker for the past two years, was accompanied by Alex, a son of a local Presbyterian church pastor, and several youth from the Peña de Horeb congregation. In our various commutes throughout the day I was able, in my broken Spanish, to converse with Alex about his hopes and dreams for the week ahead. Alex mentioned that the youth in his congregation, who greeted us at the airport, were eager to engage church partnerships differently. They had grown weary of experiences whereby others came and went with little to no lasting youth relationships and with the assumption that they were teachers and the Hondurans learners. They, as youth, were always being served, never invited to own and practice service and social and ecclesial change themselves. Instead, these youth want to be mutual learners, even to enter into partnerships with these congregations so to, as their t-shirts from a recent youth conference stated, begin "diseñando tu futuro bajo la voluntad de Dios." i.e. "designing your future under the will of God ." The exciting thing, the youth from Peña de Horeb want to enter into partnership with our youth. So we have set aside the duration of the upcoming weekend to enter into community, conversation, and fellowship, so to explore these possibilities. We will see what comes to be.. 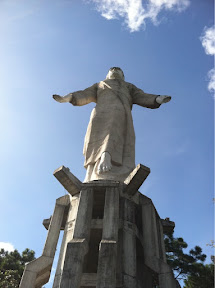 While we spent a good portion of the day simply getting acclimated to the retreat center where we are staying, we also made a brief field trip. We traveled back across Tegus and to a park situated around Cristo de Picacho, a large statue of Jesus with outstretched hands over the city. The statue rivals the one located in Rio, Brazil. However, this one assumes the posture of a resurrected and ascended Christ and accompanied by a passage from Luke 24. Yet this was not the only statue and monument in this park. We traveled through a garden and behind the statue of Christ was a much smaller one of Confucius, a marker of the Chinese culture and population that is apparently prominent within Honduras. I was able to stand in a spot where I could glimpse the top of Jesus with Confucius in the lower foreground. This sight, along with a Mayan temple replica, attest to the diverse cultural influences on the Honduran people and surely their witness to and understanding of the gospel. I am eager to learn more of the context that is Tegus, especially how the local Christian churches and ministries engage it for the sake of the gospel and the hopes of their communities, especially the poor there situated.

July 22nd
Todays immersion experiences began with interactions with the Micah Project, a ministry that extends love, grace, and family to the many "street kids" in Tegus. Many of these youth have been isolated from their families for a wide variety of reasons and forced to call the streets their home, whereby many of them become addicted to "yellow glue." This cheap and convenient drug provides a high that lasts all day and brings a false relief to their circumstances. Mike, their director, and his staff work to receive these youth, help them overcome their addiction, provide education, and exist as a family for the 13 boys who have never known such a basic human need. Mike said, "only God can save these boys, and God has." Mike mentioned that the Project operates under several core concerns and practices, none more important than the eternal practice of grace. As we listened to Mike talk, it was evident that what they do works. The kids have found faith, have overcome addiction (sometimes more than once), many graduated from high school and become teachers in local schools, and have a place to call home. Furthermore, some of the boys have discovered their gifts and exercise them as another form of healing. The song here posted is, "carta a mama," written to their mothers who have passed. One of the lyrics declares that only God can fill the void.

This missional experience has only just begun. Our team looks forward to further interactions with local ministries and youth. For now, we are on our way to Transformemos Honduras and Association for More Just Society Check out their significant work as advocates, social prophets, and people who risk it all for the sake of the most vulnerable of Honduras.