“Christian neighbors below, where are you tonight? Are you home? Would you hear me if I called? Would it be enough to simply bang the floor? Will you hear me kicking? I lift my legs, still tied together, from the knee down, and strike the carpeted floor with as much force as I can muster. The sound is undramatic, a muted thump. I try again, harder now. I kick for a full minute and am winded. I wait for some reaction, perhaps a broomstick banging back in response. Nothing. Christian neighbors, because it interests you, I will tell you about the slave raids, the slave trade. The slave trade began thousands of years ago; it’s older than our faith” (139-140).

The above citation is an excerpt from Dave Eggers', What is the What? The book unveils the story of Valentino Achak Deng, a Lost Boy of Sudan, who struggles to make his way as a refugee in the United States in the wake of an oppressive history in the largest African nation. In a twist of irony, Valentino’s U.S. apartment is burglarized while he is tied to a bedpost and, in vain, cries for help to his neighbors. As he sits on the floor and waits for his liberation, Valentino tells his story of oppression, genocide, and war that has plagued Sudan and the tribal peoples. His question continues to resonate throughout my conscience, Christian neighbors below, where are you tonight? Are you home? Would you hear me if I called? 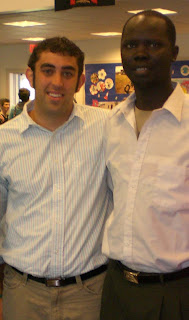 Several years ago the story of the Lost Boys became of particular interest to me through a developed friendship with one of the Lost Boys. I will never forget watching with him the award-winning documentary, God Grew Tired of Us, in one of our friend’s living room. Tears welled up in his eyes as he relived the story that was his own, traveling endless miles as a young boy in hopes of escaping the violence and war that had invaded his village in Southern Sudan. Words cannot describe my friend’s reaction when he saw a satellite photo of his journey towards a refugee camp in Kenya, a long line of Sudanese boys and girls who traveled barefoot throughout the hills, many who had cheated death, others who could not. However, nothing will ever compare to the phone call my friend received while we sat on the couch together that night. It was his friend who also appeared in the film, “Panther, we are watching you eat a donut in the grocery store for the first time.” What I viewed as documentary, he knew as experience. What we viewed as on-going injustice, he lived as personal narrative. What we could not believe a young boy could ever endure, he was living proof that, through God’s grace, indeed one could.

The past few days have been a historical for the nation and people of Sudan. Votes have been cast and the people of Southern Sudan continue to voice their hopes for what is expected to be first-steps towards their secession from the oppressive North. That is, a new and free South is on the horizon. While I would love to explore the depths of injustices that underscore the referendums long-overdue approval, there are far more qualified sources. That said, below is a list of helpful books, websites, organizations, etc., that should be read and engaged.

The people of Sudan continue to call out to us as their neighbors. Are we are home? Are we concerned?

Save Darfur
Around the country and across the globe, the Save Darfur Coalition is inspiring action, raising awareness and speaking truth to power on behalf of the people of Darfur. Working with world leaders, we are demanding an end to the genocide, and our efforts are getting results. http://www.savedarfur.com/

Enough Project
The project to end genocide and crimes against humanity. ENOUGH is a project of the Center for American Progress which aims to answer questions about what is really happening and offer a clear path to sustainable solutions. We were co-founded by CAP and the International Crisis Group in early 2007, setting out to establish a new paradigm for action. http://www.enoughproject.org/

Not on Our Watch: The Mission to End Genocide in Darfur and Beyond
Written by activist John Prendergast and actor Don Cheadle, Not on Our Watch briefly highlights the history of Sudan as well as the world’s responsibility to refrain from permitting genocide from continuing in places like Darfur. This book will also provide insights on how you can take action as an individual to work towards justice and the promotion of human rights. A New York Times best seller.
http://www.notonourwatchproject.org/ // http://www.notonourwatchbook.com/